What are you looking for?

Authentic, stately and untamed. These words are the first words in designer Marianne Huotari’s mind, when asked about the Suovilla collection she designed for Finarte. Read the story behind the collection from below.

The path leading to lakeside was trampled smooth and it tingled under bare feet on a hot summer day. Where the road bent, where the forest nearby was as its most dense and the swamp at its most moist, Marianne stopped. There was an open space filled with cotton grass. The sight was impossible to pass by – the cotton grass was so mesmerizing one would have wanted to throw herself among them.

This memory of a berry-picking trip in the northern Finland, Kainuu, was the inspiration for Suovilla collection. “I remember that moment – I was so impressed by the magical cotton grass mat in the forest near my grandmother’s place. Inspired by the memory, I drove forward the process”, Marianne tells about her inspiration behind the collection she designed. 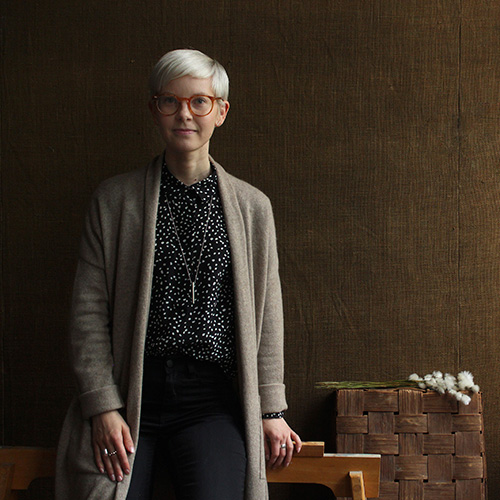 Marianne huotari graduated as a Master of Arts from Aalto University in 2014. After graduation she continued developing a minimalist jewellery collection she had started earlier, while working part time as a sales person. Gradually the idea of her own company shaped up and in the early spring of 2015 Marianne’s own brand STUDIO smoo saw daylight. STUDIO smoo is a design company, which gives Marianne a possibility to carry out her design work in a diverse way.

“The most important lesson I’ve learned about creative work is to be open-minded and to forget all restrictions”, Marianne thinks about her work as a designer. Designing new products is always a process of its own, even though processes have similar phases: background work, creating ideas, outlining, a qualification round, development and fine-tuning. Creative work takes its time and sometimes you have to wait for the inspiration to come. Sometimes it’s also necessary to question customary manners and step outside the comfort zone in order to create something new and different.

“Because I have a degree in textile design, designing a rug collection was a pleasant assignment and the visual material I created for the project was very rich”, Maranne tells.

She searched through different material options, ploughed through books about weaving and put together color charts. Finally she had as much as three collections in her hands, of which a collection with a spirit of  Nordic Boheme was chosen into development. 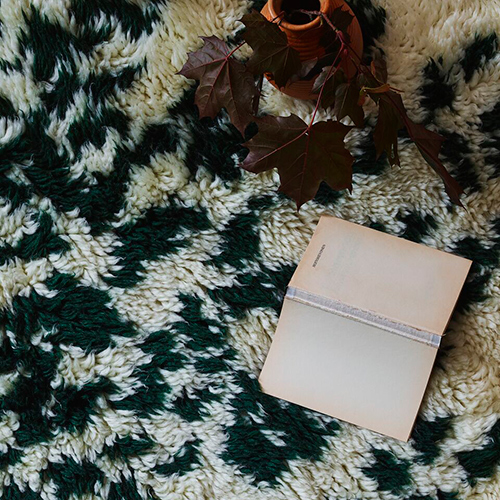 Marianne’s way of designing is often a line of process from immaterial imagery to an idea, a theme and a story. With the Suovilla collection, Marianne found her bright idea at an early part of the process: a sketch drawn by Marianne reminded her of a tuft of the soft cotton grass. Childhood memories were bright in Marianne’s mind and inspired her to continue sketching. The cotton grass theme – the story behind filled with memories, positive divergence and the esthetics – proved so powerful that it became the main thread of the collection.

When selecting materials Marianne tends to go for natural materials for their durability and beautiful way of wearing out. It is the texture and properties that rival natural materials over their synthetic counterparts. “It feels like someone gently touching your soul when you dip your toes into a soft, genuine wool rug. Real wool gives warmth, breathes naturally and does not sweat like a synthetic fiber.”

Along with natural textures, colors have a big influence on Marianne’s work as well as her daily life. Seeing harmonic color combination make her smile with pleasure. She is constantly looking for aesthetically pleasing details from her surroundings: a new pattern or form can be triggered by fallen leaves on the ground or the wall of an old building.

Luckily Marianne is now in the blessed situation that she has dreamed of from the beginning: “I have the opportunity to work diversely as a designer and carry out my ideas freely through artistic work”, Marianne rejoices.

In the future Marianne sees herself working quite the same way as now – in different projects with both Finnish and international clients, maybe at some point concentrating fully on ceramic art. Collaborations and co-projects bring the welcome occasional coworkers and community for a self-employed artist. 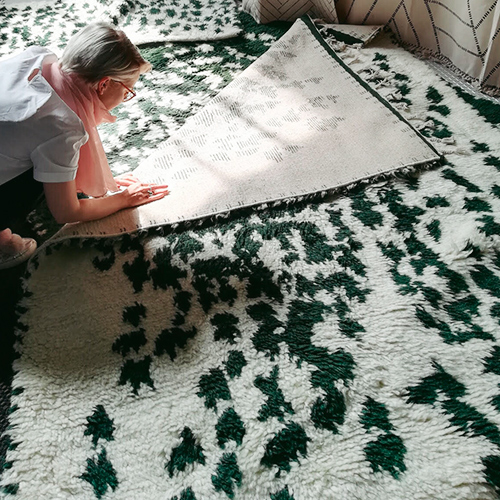 When Marianne saw the Suovilla-rug for the first time, she was speechless. There is always an idea, a vision how the end-product would look like but the first sight at the Suovilla rug startled Marianne: “The rug looked just like in my imagination – or even better!”